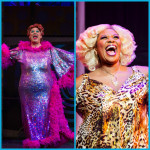 We are delighted to announce that Matt Rixon and Brenda Edwards will reprise their roles in the upcoming UK tour of Hairspray the Musical.

Brenda Edwards returns as Motormouth Maybelle. Brenda is best known as a 2005 X Factor semi-finalist as well as for her theatre roles as Mama Morton in Chicago- The Musical (West End), Pearl Pastor in Carmen Jones (Royal Festival Hall) and Killer Queen in We Will Rock You (West End and UK tour).