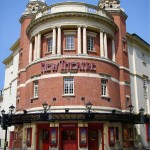 As we enter the final 2 months of the current Hairspray the Musical UK Tour, we’re taking a look at our final set of venues to discover what was happening in the 1960’s. The Animals ©Richard William, 1964 under This License

Check out all our remaining Venues