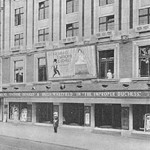 As our tour continues, we’re taking a look at what was happening in our next five cities in the 1960’s… Don’t forget to book tickets for Hairspray the Musical at these venues and more. View all venues here.