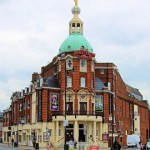 With our Hairspray the Musical UK tour now well and truly under-way, we’re taking a step back in time to discover what was going on in our first tour locations in Hairspray’s era, the 1960’s.

Read on to discover famous faces, theatre facts and the top places the locals were heading for a twist and a boogie! Don’t forget to buy tickets for Hairspray the Musical at these venues and more!