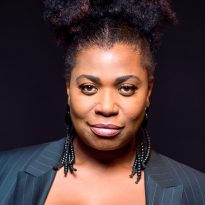 Brenda’s life changed forever when she became the last woman standing in the semi-finals of the UK’s X Factor in 2005, leaving the audience and judges spellbound week after week. In 2006, she was presented with the Screen Nation Award for Favourite Reality TV Star. In 2016 Brenda was diagnosed with stage 3 breast cancer. As of 2021, she is 5 years free of cancer and uses every opportunity to raise money and awareness for various cancer charities. Brenda is currently a regular panelist on ITV’s Loose Women and joined BBC’s Songs of Praise as a presenter in 2021.

Screen credits include: Mrs Johnson in Ben Elton’s The Wright Way and The Lips in Alan Carr’s The Singer Takes It All.

Special Guest Performances: Magic FM’s Magic of the Musicals Night (Royal Albert Hall); BBC Radio 2 with the BBC Concert Orchestra for a night with Sir Terry Wogan; Friday Night’s music night with Paul Gambaccini and on Graham Norton’s BBC Radio 2 programme. She has also had the honour of performing with soul legends Ashford and Simpson and supported Smokey Robinson at Rochester Castle with her own 11-piece band.

Other highlights include sold out concerts at the world-famous Ronnie Scott’s, London’s Pigalle Club, and at the Barbican for Brenda Edward’s Gospel Christmas produced by Raymond Gubbay.