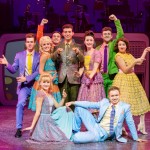 We all know Tracy loves to dance and the Corny Collins show would be nothing without the Nicest Kids in Town strutting their stuff and showing off the latest dance trends. Today we’re taking a look at what some of the biggest dance crazes of the 1960’s were…

The Twist is named after the Billboard no.1 Chubby Checker song which was released in September 1960. It was also number 1 again in January 1962.

This popular dance craze was most popular in 1962, after it was made famous by James Brown as well as by Dee Dee Sharp’s hit “Mashed Potato Time”

The Madison is a line dance that became popular in Tracy Turnblad’s hometown Baltimore. The dance features in Hairspray the Musical on The Corny Collins show.

– The Hully Gully craze was started by Frank Rocco at the Cadillac Hotel in Miami, Florida. Steps are called out by the MC and the dancers follow along. Usually, the steps weren’t difficult but the challenge was keeping up with the speed!

The Watusi is a solo dance which was popular in early 1960s.

The Pony was made popular by Chubby Checker song “Pony Time”.

The Hitch Hike dance craze started with Marvin Gaye’s 1963 hit of the same name and involved using the “hitchhikers” thumbs up gesture.

Come to the Hairspray the Musical UK Tour and see some of these moves and more on stage!