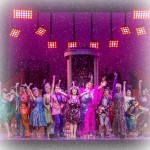 I can hear the Jingle Bells! It’s only 4 days until Christmas, so as a Christmas gift to you, here are some great Christmas songs that came out in the 1960’s…

2. Please Come Home For Christmas- Charles Brown
This track was released in 1960 by Charles Brown, the American blues singer and pianist. Although the original release only reached #76 in the Billboard Hot 100, there have been a large number of successful releases since.

3. Christmas (Baby Please Come Home)- Darlene Love
The original version, released in 1963 was released as part of a Christmas compilation album, “A Christmas Gift for You from Phillies Records”.

7. You’re a Mean One Mr Grinch- Thurl Ravenscroft
Written for the 1966 cartoon special of Dr Seuss’s “How The Grinch Stole Christmas!” and performed by Thurl Ravenscroft who also voiced many Disney characters.

8. A Holly Jolly Christmas- Burl Ives
This 1964 song was featured in the Rankin-Bass Christmas TV special Rudolph the Red-Nosed Reindeer.

Happy Holidays from everyone at Hairspray the Musical UK Tour!